#SheByDC: On Beauty With Danisha – Through Vitiligo & Body Dysmorphia

We first meet Danisha during our #SheByDC shoot, where she pointed out the vitiligo around her eyes — now greatly reduced from a recent skin grafting procedure — as she was about to get her makeup done. She later tells me that it really started with a tiny, seemingly uncomplicated white spot. “I thought I could just be prescribed some typical cream and be done with it… But it just started growing and growing.” So began Danisha’s long, now and again tedious journey with vitiligo. Although through it all, she reveals that the bigger demon for her has always been the struggle with Body Dysmorphia/ Body Dysmorphic Disorder (BDD).

Over our virtual catch-up, Danisha strikes me with her vivacious energy and perspective as we cruise through conversations about WFH (Danisha works as a state lawyer), a mutual appreciation for over-slapping our faces instead of “patting our toner in”, amongst other shenanigans. Then deeper into the conversation she opens up at length and unadulterated, her experience with vitiligo (as well as choosing to remove it), the tribulations of BDD and “beauty”, in her own words.

On Growing Up With Vitiligo 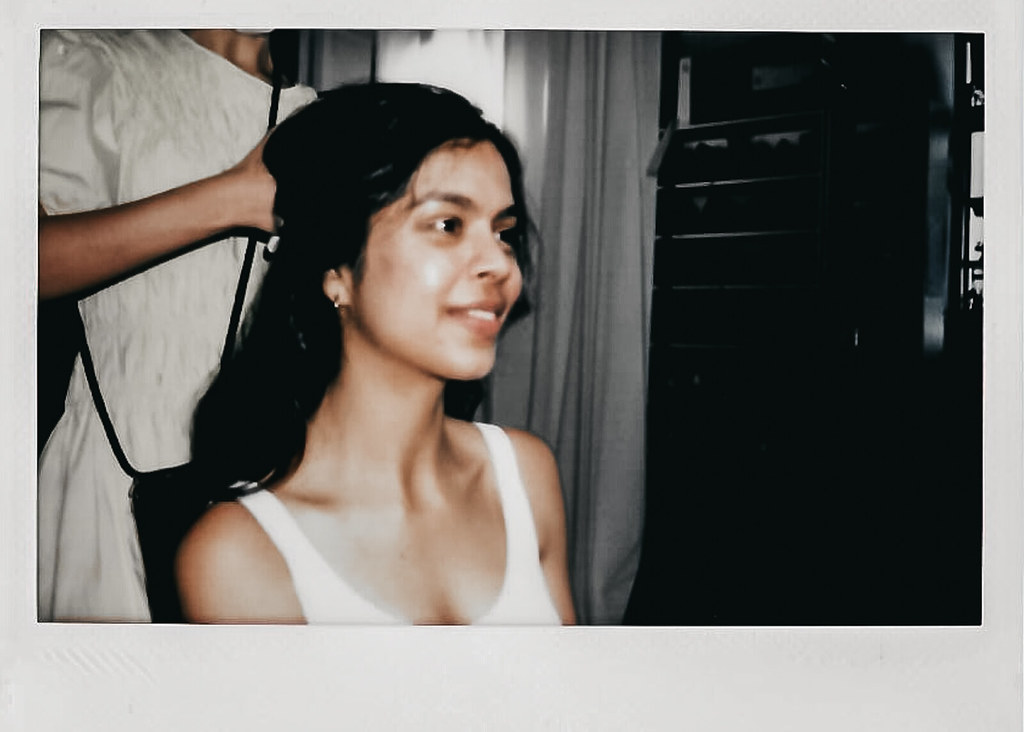 The beginnings of the not-so-tiny white spot.

Danisha initially assumed the small patch to be a common fungal skin infection but it turned out to be a lot more complicated than that.

“It started with a little white spot, I remember going to the skin centre thinking it was tinea versicolour and I thought I would be prescribed with topical cream and be done with it. But little did I know it started growing and soon it was all around my eyes.”

“I’ve been very blessed with the people I have had the pleasure of interacting with throughout my life. I never got bullied in school because of my vitiligo. Even though [my vitiligo] was very prominent, it never really bothered me because of my environment that I had.” 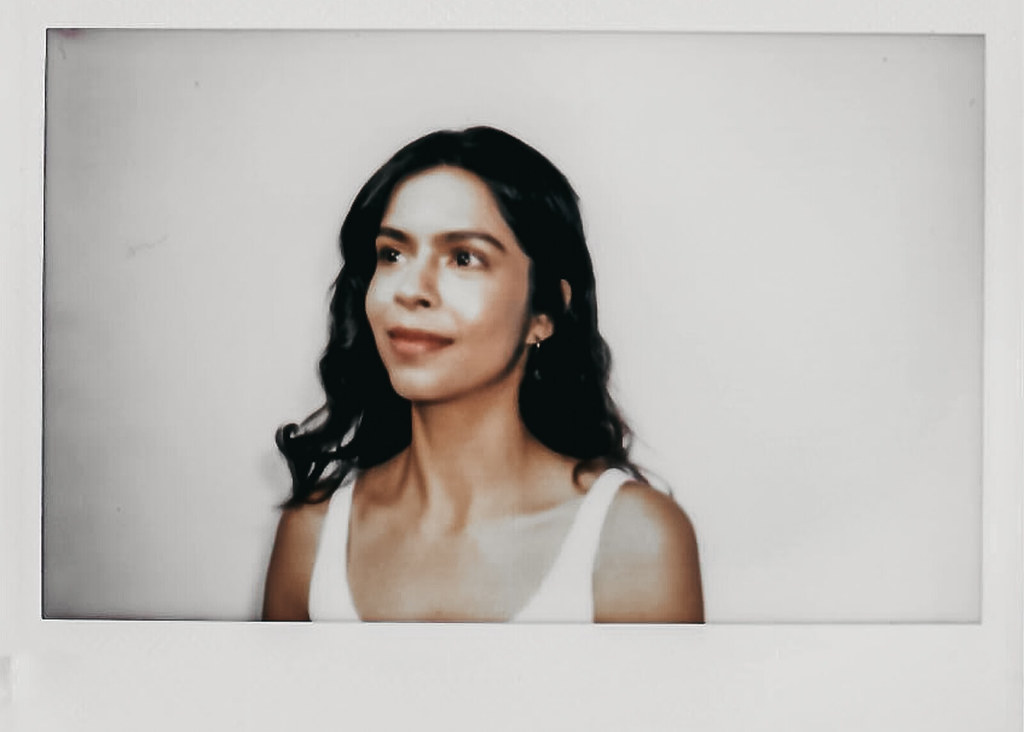 Turning the page: getting her vitiligo surgically treated.

After years of successfully managing and alleviating her vitiligo through a combination of treatments (from homeopathy, diet management to western medicine etc.) Danisha decided to undergo skin grafting last year. Skin grafting surgery for vitiligo aims to achieve complete re-pigmentation that cosmetically matches the surrounding normal skin. In other words, it means getting your vitiligo cosmetically removed.

“My vitiligo had already decreased significantly from years of homeopathy and western medicine. It was a very long journey and vitiligo is an autoimmune disease and different bodies react to treatment differently. Sometime last year, I took the plunge and decided to get skin grafting. Since the skin grafting procedure it has made putting on makeup a lot easier. I haven’t experimented with a lot of makeup, but because of my vitiligo I’ve tried a lot of concealers!”

Now if you were thinking…

The bottom line: concealing does not necessarily mean you don’t love your own skin.

Danisha is a self-professed (and I concur) concealer junkie; from when she started going through tubes of concealers in search of the perfect one for her vitiligo. It’s a popular rhetoric, especially amidst the burgeoning body positivity movement, that concealing your flaws is somewhat of a regressive thing. I posed this to Danisha.

“As much as the definition of beauty should not just concern our outer appearance and I’ve never felt the need to wear makeup because of my vitiligo. It’s more about when I interact with people, or when I have meetings. How I perceive [concealing my vitiligo] to be important is that I’d like people to listen to what I have to say, instead of being focused on what’s on my skin. That was why I started concealing it. I wanted to be known for my words and my personality, instead of the way I looked.” 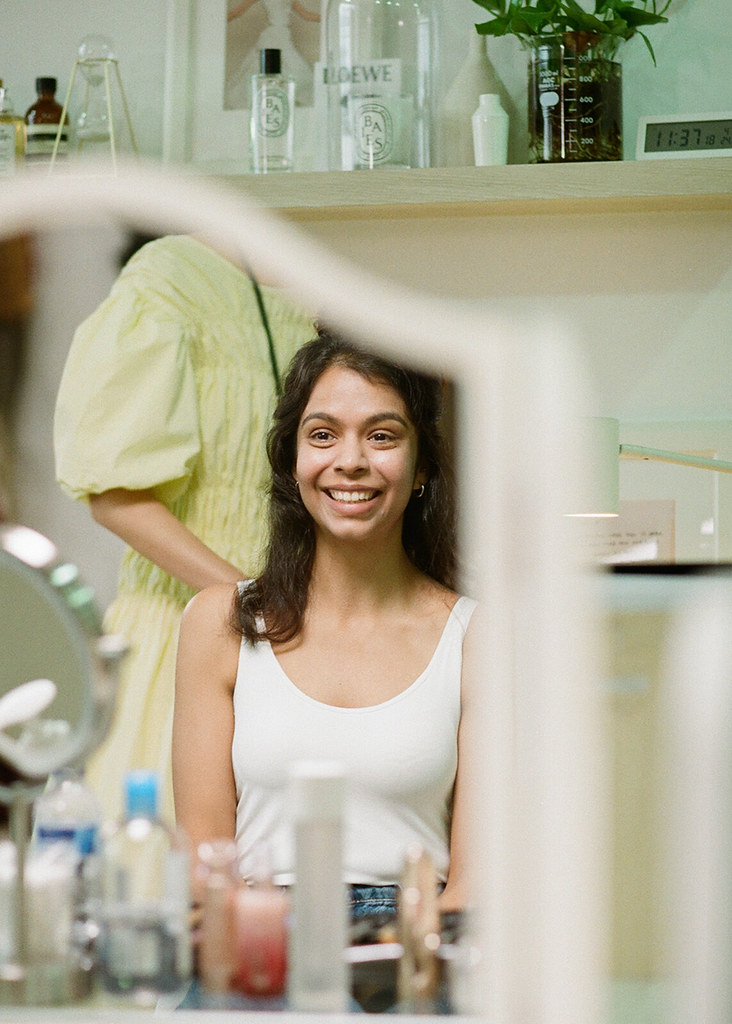 Danisha admits that the real war however, lay in her struggle with Body Dysmoprhia/Body Dysmorphic Disorder (BDD). BDD is in short, a body-image disorder characterised by persistent and intrusive preoccupations with an imagined, or slight defect in one’s appearance. For Danisha, that meant a profound preoccupation with her weight and physical size. She looks back on the trigger point, beginning with doing ballet in her childhood.

“I think I was always normal-sized, pretty much my whole life. And I was pretty active, I did dance. I was a ballet dancer for a while and I was always the biggest one in my class, to be very honest. Most of the girls in my class didn’t have as many curves as I did. It felt like being bigger was not the make of a ballerina.”

“Being aware of the disparity — however trivial — sparked a downward spiral with the way I perceived beauty.”

BDD: The agony of wanting something that does not exist.

BDD bore down on Danisha’s social life, far more than her vitiligo ever did. She opens up about one very low point.

“It took a toll. As a teenager, I was so obsessed with my weight and I would be so opposed to taking pictures because of it. I look back now and realised how silly it was because not only was I dealing with a fictional problem, I have no photographs to cherish. No matter how much weight I lost, even when I was at my lowest, it just wasn’t good enough.”

Moving forward: A constant work in progress, but it’s okay.

BDD will be a lifelong wrestle for many. For Danisha, she is navigating her way with striving towards a more active lifestyle and more positive mindset. She also has some pretty solid heartbreak advice.

“Comfort is the enemy of progress and I think I overcame [BDD] with exercise. For every heartbreak  we go through — it doesn’t have to be in the romantic sense, anything that mattered to you that didn’t really work out — you can take that pain in your stride. So I started to run and realised that the strength and stamina that I had was way more beautiful than the weight I had lost, or how I looked in the mirror. Exercise definitely helps with BDD. Eventually (and sooner rather than later) that pain you carry turns into something wonderful!”

“I think it’s a lifelong journey. You really got to keep reminding yourself that you are strong. If not today, when? If not you, who?” 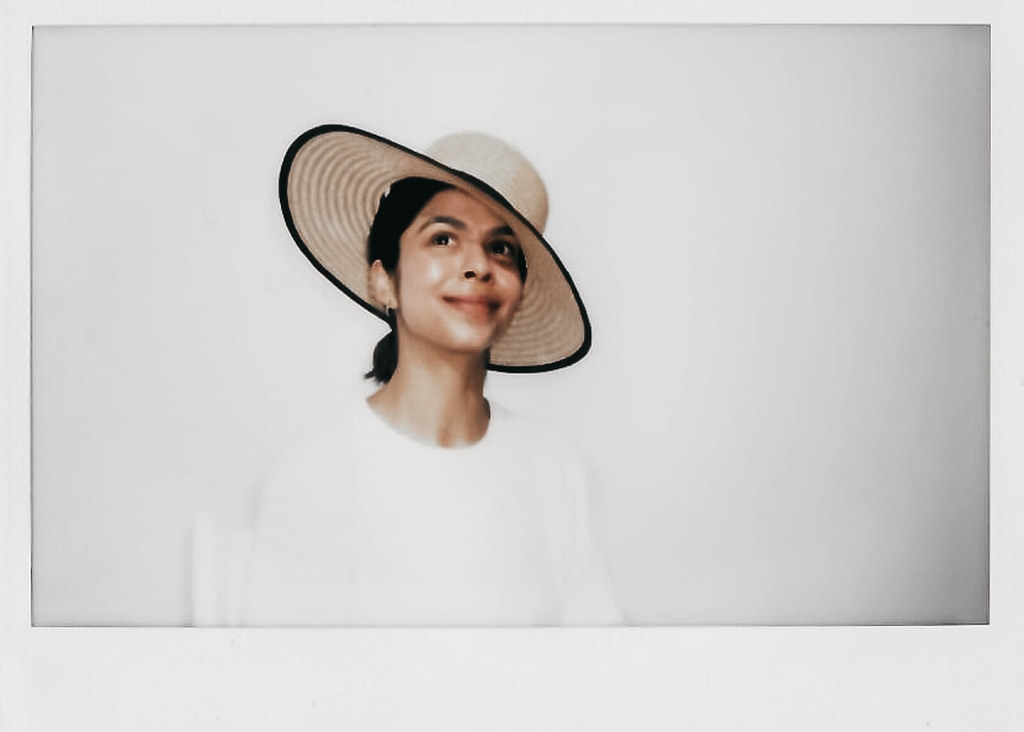 “Inner beauty” might feel banal, but it will always make sense.

“When I was younger, beauty to me meant what was on the outside. The definition of beauty was aesthetic, it was very on the surface. As I got older, I’ve shifted my paradigm to believe that beauty comes from within. I mean it’s very cliche like, beauty lies in the eye of the beholder. But I think beauty is how we perceive ourselves to be, not what other people perceive us to be.”

“It’s also about adaptability. How we deal with the circumstances laid before us, good or bad. If you feel you want to change something, do it. I think beauty is about being resourceful and inquisitive.”

The dynamism of beauty.

Looking back, Danisha maintains a newfound sense of beauty — it lies in the physical, but also within and above all, is in what one puts forth.

“The way I look at beauty now revolves around vibe and energy. If she or he can light up a room, if she or he is able to be kind and gentle to herself as she is to others. Beauty is about taking care of others as well. The people I really looked up to are Audrey Hepburn and Grace Kelly! Watching them exude class and minimalism made me realise that beauty lies in how we carry ourselves.” 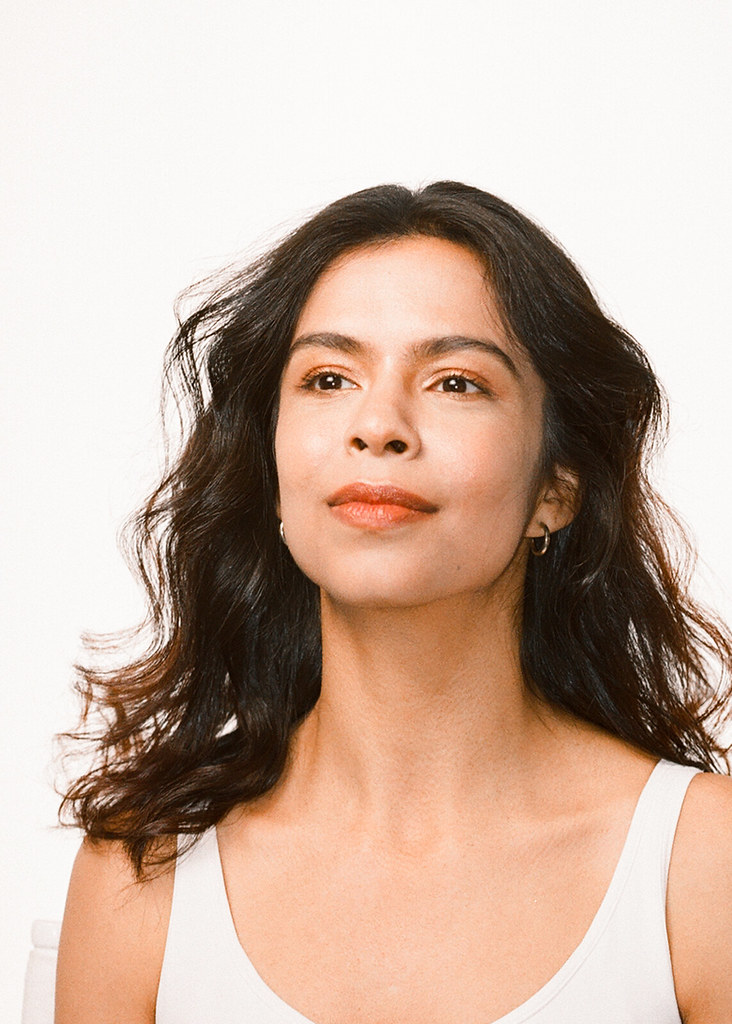 It wouldn’t be us if we didn’t try to snoop a beauty routine! Danisha describes her regime as for the most part, rather “low-maintenance” and swears by good ‘ol plain water for great skin. It’s quite an understatement, given how well-researched all her beauty buys are. A critical step for Danisha, considering her sensitive and rosacea-prone skin. So if you have similarly reactive skin, you might want in on these products!

I love the way it feels on my skin and it lets me know exactly how long I should be washing my face for! I use this once every two days.

A holy-grail! Recently I’ve also been diagnosed with rosacea so I flare up and get red really easily. I’ve tried many products for sensitive skin, but somehow gravitate towards this. I really like how it doesn’t strip your skin.

I like to spritz this after washing my face -- I find the spraying bottle a lot more sustainable than cotton pads!

It took me very long to find a good sunscreen. I’ve had a problem with sunscreens leaving a white tinge on my skin, but I finally managed to find a good one at Watson’s! This has been very good, they have a version for sensitive skin too. I always purchase the smaller size because it’s so easy to bring it around!

I used this while at the #SheByDC shoot and have been enjoying it so far.

I found this while looking for products that would soothe my rosacea. I quite like what this brand stands for too! The serum has a slight orange consistency and it does show a little on my skin, so I tend to use this at night.

THE ORDINARY HYALURONIC ACID 2% + B5

I use this whenever I have more redness on my face! It's another one I picked up in the course of researching for products that would help my rosacea.

Big hugs and thanks to Danisha for lending her experiences to this article.

We are also always on the lookout for stories and faces from our community to be part of our #SheBy DC series! Stay in the loop of our #SheByDC happenings via Instagram and our Telegram channel.

Body Positivity | An Honest Guide To Accepting Your Body

#SheByDC: Caen Loh & The 5 Life Lessons She Took Away From Her Time As A Model

Body Positivity | An Honest Guide To Accepting Your Body

#SheByDC: Caen Loh & The 5 Life Lessons She Took Away From Her Time As A Model